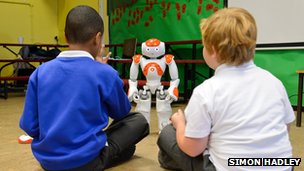 Autistic children may learn better from robots than from human teachers, according to evidence emerging from a trial at a school in Birmingham.

Two humanoid robots, Max and Ben, have been helping teach children with autism at Topcliffe Primary since March. The school is one of the first in the UK to try the technology.

Head teacher Ian Lowe said: "The robots have no emotion, so autistic children find them less threatening than their teachers and easier to engage with."

He added: "They are really cute looking. Children with autism struggle with communicating with adults and with other children, but for some reason they engage with these robots.

"Children who first come into school unable to make eye contact with humans start to communicate through the robots."

About a quarter of the children at the school are autistic. It is a mainstream primary that receives specialist funding to support autistic children in separate classes, using a range of technologies.

The robots are knee-high and move like children. The school is using them to teach phonics and play cards or memory and imitation games with children aged from five to 10.

Researchers at the University of Birmingham who have been analysing the best ways to use the robots say the key is in the programming.

Memory gamesDr Karen Guldberg, director of the university's Autism Centre for Education and Research, told BBC News: "We are thinking creatively about how best to programme these robots to help develop the children's social interaction and communication skills."

In particular, she said, the robots could be used to improve the children's basic learning skills.

"We do a range of different activities with the robots acting as a model for the children's behaviour. For example memory games, which get the children to imitate the robot's movements, can help them become engaged and motivated with learning," she said.

Dr Guldberg added: "It is amazing to see how engaged and focused they can be when they are working with the robot. It can be very difficult to get children with autism to focus."

She said autistic children in particular found technology predictable, clear and motivating but a well thought out programme could also work well in mainstream classes.

The robots have been donated by French manufacturers, Aldebaran. They cost about £15,000 each.